Surgery (the band, not the hospital thing): a personal history

In 2012, AmRep rockers Surgery are long gone. No retrospective box set, no articles about their place in and influence on the post-hardcore scene, not even a proper live recording of any of their songs. This is a shame.

Surgery dropped my jaw back in the early 90s. An excellent blend of rock, noise, punk, and smarm, they had just the right concoction to go straight to my little black heart. A four-piece with the same line-up for their entire recorded career, they went from Syracuse to the unknown zone of Lower East Side NYC to a major-label deal that unleashed one album on the world before singer/guitarist Sean McDonnell died in 1995.

The majority of their recorded output appears under the auspices of the splendid Amphetamine Reptile Records, home of other kindred spirits busy spiking the post-punk punch with incongruous elements. They  have a track ("Action Candy") on the third installment of AmRep's legendary Dope-Guns-'N-Fucking In The Streets compilation series, released in 1989. I bought a cassette tape compilation of the first three volumes in 1989; with the exception of Mudhoney, all of the bands on the tape were new to me. At this point, Surgery didn't really leave a lasting impression in my mind. Helios Creed, Cows, and Halo of Flies grabbed my attention more then the others, and I started buying just about anything I could find on AmRep. (To my shame, I did not have a working turntable at the time, and was only buying cassettes and CDs.)

Also in 1989, Surgery released their first 7" under the AmRep imprint ("Not Going Down" b/w "Blow Her Face"), as well as a the vinyl-only mini-album Souleater (on Glitterhouse in Germany, and Circuit Records in the USA). Both chunks of solidified petroleum swagger and lurch, taking a leisurely stroll down the art-noise trail on their way to the rock mountain.

In 1990, Surgery released another 7" on AmRep, "Feedback" b/w "Fried". Still lots of noisy art-rock leanings, but their distinctive guitar was really starting to crystalize. But back then, I was out of the loop on all three records. They completely flew under my radar and I wouldn't hear them until some years later.

Then, in 1991, Surgery dropped their first full-length (if you can call 31 minutes "full-length") LP and CD on AmRep, Nationwide. I was hungry for a music fix, saw the CD, and figured hey, it's on AmRep, how bad could it? Nationwide changed everything for me. Only nine songs, and just over half an hour, but what a statement...


At first, I wasn't sure what to make of it - while definitely loud and somewhat angry, it didn't really sound like Black Flag or Poison Idea or even the other AmRep bands I was already digging. So much unapologetic r-o-c-k, and what can only be described as "boogie" guitar. Like most of my favorite records, it took a few listens before I was convinced, but once I understood it, I became certain that this was one of the best rock records ever recorded. 21 years later, I maintain that belief.

Here is an actual music video for "Maliblues," the second track from Nationwide. This is taken from Dope Guns & Fucking Up Your Video Deck Volume I. You get a minute or so of build, then watch out for the falling rock.


Nationwide has joined a small group of albums that I have played a ridiculous number of times, where I am intimately familiar with every single second released for public consumption. It is in good company with classics from Slayer, Public Enemy, Black Flag, Black Sabbath, and The Makers, amongst others. I became obsessed with releases by all of these bands at one time or another, and I still listen to them all now. I'm not sure, but I think I have listened to Nationwide more times than any other album I own, and that covers a lot of ground.

Anyway, Surgery next put out a phenomenal 7"/CD-EP, Little Debbie, in 1992, also on AmRep. Just three songs and 14 minutes (on the CD, only two songs and eight minutes on the 7"), but it is damn near perfect. "Little Debbie," "Queen to Queens Level Three", and "Exquisite" are so, so good. Full-tilt art-damaged rock-n-roll savagery, vaguely menacing and menacingly vague.

And here is another actual music video, this time for "Little Debbie," taken from Dope Guns & Fucking Up Your Video Deck Volume II.

Next up was 1993's Trim, 9th Ward High Roller, once again on AmRep. This one also didn't immediately grab me, and is still feels a little different. Not to say it isn't good - it is a damn fine rock record. As with most things like this, the more I listened to it, the better I liked it.


Here is that song "Maldia" from that record. I don't think any further music videos were made after "Little Debbie", so you can just stare at the record cover while you listen to it.

Even way back when, I liked this record enough to go see Surgery when they toured behind it. On May 28, 1993, Surgery played the infamous Kennel Club in San Francisco, with Chokebore and Today Is The Day. As usual for most bands I have seen, their live set was faster, sloppier, and funnier than the studio stuff - they were great! I bought a t-shirt (which I still have) and asked the guy at the merch table if any live releases were planned. He stunned me by saying that it would be up to Atlantic - Surgery had just signed a major-label deal.


Wow. The Nirvana thing was still in effect I guess, and a lot of indie bands were still getting snapped up by the majors. I held my breath and waited, and in 1994 we got Shimmer, Surgery's first and only major-label record, complete with PMRC tattoo... 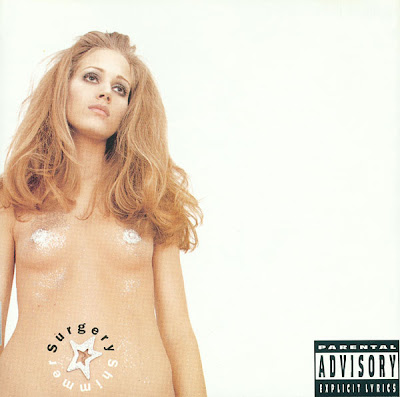 Shimmer is an odd mix of their old boogie-noise-punk with newer and seemingly more radio-friendly tracks. The lead single was "Off The A List"; Atlantic obviously hoped this would be a hit with those crazy alternative-rock kids, but it wasn't. I have read references to a music video being made for this song, but have not been able to scrape it up online. I'm kind of glad if that is the case; this is very far from my favorite track by the band, and certainly not my favorite track on Shimmer. It's a nice little ditty, but barely hints at the ferocious intensity the band was capable of exhibiting.

Here, listen to "Off The A List", then we'll listen to another cut from the same record:

Not bad, right? You could imagine hearing that on your local "cool" commercial rock radio station, nestled in between Pearl Jam and Nirvana. Now check out "Bootywhack". More swagger and old-style Surgery boogie-down rock, even if it is noticeably cleaner.

My favorite songs from Shimmer aren't even on YouTube in any form. "Vibe Out" (complete with weirdo organ breaks), the rollicking "Mr. Scientist", and the low-key "Gulf Coast Score" are nowhere to be found. But you know what? You can buy Shimmer used on Amazon for a goddamn penny (well, plus shipping), maybe do that if you are curious.

So, Shimmer was not then, and is not now, my favorite Surgery record. I was underwhelmed by the new, more commercial direction and cleaner sound. Worse, I was young enough to be indignant that one of my favorite bands had made the unforgivable sin of selling out. This just wasn't punk, man!

Still, the album had some catchy rock songs, and now that they had sorta belly-flopped with the first major-label release, I had hopes that the next record might be a more "back to our roots" kind of thing.

Sadly, it was not to be. Outside of a couple of CD-singles taken from Shimmer, this was Surgery's last release.

Early in 1995, singer/guitarist Sean McDonnell died from complications due to, of all things, asthma. He was 29. According to Your Flesh magazine, for which Sean used to write, his death was due in large part to "a missing medicine bottle", which seems all the more tragic. While apparently a party-hearty dude, his death appears to have little to do with rock-n-roll excess. Years later, a guy from whom I bought a 7" on eBay claimed that the asthma attack was just "code" for a heroin OD. I can find no other references to this, and I am disinclined to believe Random Internet Dude.

Your Flesh #31 features a memorial section about Sean, including some wicked and/or hilarious reviews he wrote for YF, and Sean's eulogy from Surgery drummer John Leamy. This is actually how I found out about it - in those pre-internet days, I got most of my music info from zines like Your Flesh, Fiz, Flipside, Thora-Zine, stuff like that. I was floored.


Afterwards, the band broke up and that was that. In doing some research for this article, I found that drummer John Leamy went on to play with Masters of Reality for a few records. I knew nothing about that band, so I checked 'em out real quick. Seems kinda like Hawkwind-lite, not really my thing but I'm glad to see Leamy is still an active musician.

As for Surgery, there is one fan-made MySpace page that features four tracks from Shimmer and nothing more, very bare-bones. (I didn't make it. If I had, it would be better.) No real website, nothing else except a few blog mentions from other music dorks, and thankfully a few live video clips uploaded to YouTube. The following three videos include about 43 minutes from a live show in NYC, May 20, 1992:

And here we are... Another awesome, important band is relegated to the tiniest margins of underground culture, and people continue to get up and go to work every day without knowing or caring. Such is the way of the world.


End Notes
Surgery shows up in a few places not listed above. These I know for sure, maybe there are more?

A quick word about MP3 blogs… Most of Surgery's output can be found and downloaded for free from MP3 blogs. I am not sure what to make of this. Nationwide, Trim 9th Ward High Roller, and Shimmer can be purchased as CDs or MP3s through Amazon, amongst others, so downloading these releases from some guy's blog is pretty pirate-y. Listen to the songs via YouTube, or even the previews at Amazon if you are desperate. If you like the music, go legit and buy it. I have no idea if any money from new CDs or MP3s makes it way back to AmRep or the band members, but it's the principle that counts, right?
Posted by Sam at 3:54 PM

Other Cranks and Miscreants